It’s been nearly 2 years since the animated Walt Disney film took the world by storm. Toddlers and young children everywhere are still belting out Academy Award winning “Let It Go”, sporting platinum blonde braided wigs like Elsa, and admiring the bravery and courage of Anna.

Although temperatures are rising throughout Dallas and Fort Worth, many children are requesting Frozen-themed parties for their summer birthdays. Understandably, this makes many parents nervous as the main component of Frozen is the cold. However, there is a Frozen-themed party that actually fits right into summer. 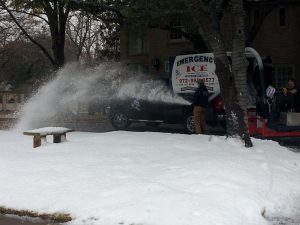 For those unfamiliar with the Disney film, one of the most popular characters is a talking snowman named Olaf, whom Elsa and Anna built together as kids. He takes part in Anna’s adventure, remaining a loyal companion to her throughout her journey. One of Olaf’s favorite things is summer. Although he has never experienced it himself, he dreams of the heat singing, “a drink in my hand, my snow up against the burning sand, probably getting gorgeously tanned in summer” – of course, not knowing what actually happens to snowmen in the heat. At the end of the movie his friends find a way for him to enjoy the warmer weather without melting.

An Olaf-in-Summer theme is the perfect twist on a Frozen birthday party during the warmer months. Since most parties revolve around Anna and Elsa, this will be a breath of fresh air among parents who have probably attended at least 15 other Frozen birthday parties within the past 2 years. Here are some ideas to include in your Olaf themed party: